Taxes are bad, but necessary.

DirectDemocracyS, and all related projects, have a clear relationship with taxation.

From a political point of view, we are for the law and for the respect of every rule, therefore also as regards the contribution that each of us gives to society, we are convinced that people and companies must comply.

Like all our articles, we do not want to make a treaty on taxation, so we try, as always to simplify, for specialists, we have groups that deal with this important topic, which you can access if you prove that you have the qualifications. For the technical details, those who are experts can analyze them in our working groups.

Anyone of us wants the money he gives to his country, to the state, but also local taxes, to be spent well, in the common interest.

To simplify, let's look at how wealth is created.

You can create wealth through your work, through investments, through income, and in unethical ways, such as crime, scams, and other methods. Wealth is created to maintain, and if possible improve, one's standard of living.

On these created wealths, one's own country, state, but also local territorial subdivisions, ask for a contribution, usually in percentages, or fixed taxes, to then return the sums received, through services, and facilities.

The political problem is to make sure that taxation is bearable for those who create wealth, so as not to have to choose whether to pay taxes, or allow us to maintain an acquired quality standard, or to have a more comfortable life.

We tell you right away that the question, however simple it may seem, is very complex.

Those who pay taxes, with the exception of tax havens, will continue to complain about the weight that taxes have, on their balance sheets, both business and family.

The country, the state, and the local authorities, on the other hand, will complain that their income is not enough.

Finding a balance between request and payments would be simple, if each party simply did their duty.

The citizen, and the companies, should pay the due, and the country, the state, and the local authorities should spend the sums received in the right way, eliminating waste.

Our solution, which we simplify here, but which we will explain in other detailed articles, is simply to apply the laws, and where necessary to intervene with changes, to allow all parties to respect each other.

Laws must reward the deserving, who pays all taxes, and find, investigate and severely punish anyone who evades taxes, even a very small sum.

On tax evasion, we will make a detailed article, but we bring you a trivial example. 1,000,000 one-dollar escapes, that's twice as much as one big $ 500,000 escapism. It seems trivial, but tax evasion also varies from country to country, based on cultural traditions, customs, traditions, and history. There are countries, where tax evasion is worth around 200 billion euros every year (for example Italy), and countries where, thanks to strict but fair laws, and almost perfect tax culture, tax evasion is not nearly here I'm.

In the world. In total, global tax evasion amounts to between 21,000 and 32,000 billion dollars, equal to the GDP of the United States, Japan and Germany combined. With such sums, available for investment, and to create jobs, many problems could be solved, all over the world. 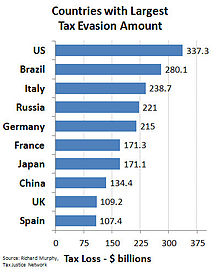 Given that even a single unpaid dollar, or undeclared asset, by billions of people, are very important sums, often vital, to provide all services and basic social aid.

Linked to tax evasion, there is the scourge of organized crime, which for example in Italy is estimated at almost 200 billion euros. Our Italian friends will excuse us, if we mention them often, they are not the only ones with these problems.

DirectDemocracyS, and all related projects, unites crime, often organized, in addition to any large or small tax evasion, even any waste of public money.

Because the fundamental question, which we mentioned earlier, is what happens to the money we pay with our taxes?

Labor taxes, paid as contributions, for social security will, in theory, be returned to us, with interest, at the end of our work. So, we pay part of what we earn by working, and then get a pension. Here too a distinction should be made between public pension and private pension, but also in this case we will make a dedicated article, pensions.

Essential services, and many current expenses, of the various public bodies, are financed by us citizens, and by our companies.

The waste of public money, with relative remuneration, and transactions, are money, and often assets, not declared to the tax authorities.

People and companies seek, and often find ways to cheat, as public bodies try to make laws to catch cheaters. A true vicious circle, in which each side tries to anticipate the other.

Our solutions, to solve all the problems, on taxes, will be published in the detailed article.

Principles are the moral foundations on which the concepts and norms are based, which an individual or a community are i...

Based on the rules, of DirectDemocracyS, the Regulation Group was formed. Amendment proposals. Your own modifications ...

Regulation group. The Official Rules of DirectDemocracyS, and all related projects, have been created, by various group...

Registration, and creation of personal profiles. We receive many messages, and we need to clarify some very important c...

Fundamental questions
Work for others

One of our rules requires and obliges anyone who joins us to work, together with all of us, for about 20 minutes a day, ...

Anyone who registers and creates a personal profile on our website, and then joins us, generally does so out of simple...

Our Philosophies
The family

The human being, is a social animal. The basis of the company is made up of many families. For almost all of us, the fam...